Vegan Without Frontiers is about spreading a positive message about all aspects of veganism, whether it is choosing not to eat animals, or saving endangered species from poachers in Africa. We met Humperdinck Jackman and Cynthia Gibson on our ferry journey to Port Said and spent a considerable time with them at the port getting our documents sorted. Humperdinck is traveling through Africa with his charity Africality to raise money for game rangers and save elephants and rhinos. This was a good opportunity to learn more about poaching and Humperdinck agreed to be interviewed for our blog. 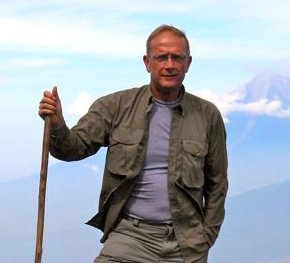 Humperdinck: I am Humperdinck Jackman and I am driving from Europe and around Africa on behalf of the charity Africality.

Katana: Where have you been already and what have you experienced? The good bits.

Humperdinck: So far I’ve driven about 10,000 miles in my Land Rover from England, two months in France, Italy, and then around the Balkans and Turkey, now sitting in Egypt (Port Said).

Katana: First let’s talk about Africality. Could you talk a little bit about what it does?

Humperdinck: Africality is a British charity with one purpose, which is to raise money to employ more game rangers in Africa, particularly in Kenya and Ethiopia. When people talk about saving the elephants and saving the rhinos, this is very specific. For every thousand euros we raise, that enables us to hire one more game ranger. That is the salary for the whole year, accommodation and food. This is for people who are going to get shot at.

Katana: Why especially are the game keepers so important to stop the elephants being killed?

Humperdinck: Because poaching is out of control. In 2013 it was the worst year of elephant poaching in history. Just looking at elephants for a moment, the latest census is that there are about 400,000 elephants left in Africa. And in 2013 the most conservative estimate is that 40,000 were poached. So we have the year 2023 until there are no more elephants left, if it is left unchecked, and history shows that it could well go to that point. When the elephant population drops below 150,000, they are effectively extinct. One female elephant gives birth three or four times a lifetime.

Katana: Only one baby elephant per time.

Humperdinck: When you look at the extinction of an animal, of a species, there has to be enough of the herds left, or they are effectively extinct, they are doomed. So the next five years are absolutely imperative, or elephants will be only seen in zoos. What prompted all this was when I planning the trip. I wanted the trip to be more than just me being a “rich tourist” in Africa, looking at an elephant and knowing that I will be one of the last people to see this. And I looked at many different causes, female slavery to female genital mutilation to all sorts of things. In August of 2013 there was a particular incident in Zimbabwe when 300 elephants were poisoned by cyanide. A few weeks later, although officially it happened a year before, (it only became widely publicized last August or September) the West African Black Rhino was declared extinct. I looked at how one person making a journey could make a difference, so we came up with an idea, using the statistics available, that a game ranger costs about 1,000 pounds or euros a year. Then raise 75,000 pounds for a journey that is 75,000 miles, join the dots and not just go to the fun parts of Africa, make it a whole circuit in navigation, and that was the basis for a charity. Raise 75,000 pounds, one person doing a 50 nation journey that was 75,000 miles over one or two years.

What’s happened in the last year is that now the official policy for game rangers, in Botswana and Kenya for sure, is to shoot poachers on sight. There is no trial, there is no arrest. If they are in a gun battle, they shoot to kill.

Katana: Before our trip I was reading about going on safaris to look at animals, and tips on how to spot potential poachers, because a lot of them go in with the rest of the tourists, but what they are actually doing is scouting potential elephants for poaching.

Jonathan: One of the useful tips is to turn off geo tagging on all your photographs, because if you end up posting those online, they are basically pinpointed targets for poachers to go and kill.

Humperdinck: It is a crisis, and I am not going to change the destiny of elephants, but if people like me, and there are so many people like me trying to make a little difference… Governments can only do so much to stop the trade. In 1965 there were roughly six and a half million elephants roaming Africa, and we are now at 400,000. They are doomed without help.

Katana: The lions are getting shot by stupid people hunting big game, thinking it is a big deal to point a gun at an unsuspecting lion and come out victorious in this ridiculous “battle”.

Humperdinck: Also the lions are getting shot by pastoral farmers who get upset over a lion having attack one of their cattle. So they go out and they hunt down the lion and kill it. What we’ve been doing (and this is in Kenya) is trying to encourage these same farmers to view a lion as an asset in their land. If you have a sick cow, it is going to die anyway, you can’t sell it. Maybe it has TB, which is epidemic in Africa. What you could do is drive it out of the pasture land to where the lions are, and feed the lions. Then you have the lions which bring the tourism, and it is what they eat. One of the leading conservationists has taken a slightly different approach. She funded somebody to create a cartoon series about an elephant, about how great they are, with magical powers, you know, a friendly caricature. These comic books have been given to school children in Kenya. So over the next few years these children are going to be saying, “No, you can’t kill elephants!”

Katana: Are you planning on visiting some of the game rangers?

Humperdinck: Africality has been endorsed by the Born Free Foundation, whom we support fully, and Born Free have invited me to visit them in Ethiopia, Kenya and Burkina Faso. I will spend a week with each of their groups of game rangers, and what they want me to do is add some publicity to what they are doing and also when I am there to video them, and send an edited video back to their offices so they have more up-to-date material for their website. Our charity, because we are small fry, as we raise more money, we will be giving grants also to Born Free. Because one thing about Born Free is you know the money is going exactly how it is needed. Their offices are extremely modest, every penny is watched. Our intention is also to hire game rangers ourselves, so direct employment, no middle man. This will be in Kenya, where myself and one of the other trustees of the charity have been invited by the local government to manage a large game reserve, to make a difference, to bring the tourists, and when the local people see that there is tourist money coming in from the wildlife, then the local people are more likely to turn on the poachers.

Katana: Why are there so many poachers, or rather why are so many elephants and rhinos getting killed?

Humperdinck: There aren’t that many poachers, but it only takes a few. The trade is largely the Chinese, Vietnamese, the Taiwanese and the Thais, for traditional medicine and for carving. They cut the tusks and they abandon the rest. They chop the tusks off with axes or chainsaws. You might find one poacher with 150 tusks, 75 elephants slaughtered. Here is something for you: you might have heard of a tusker. It is also the name of the beer in Kenya, it means elephant. And the joke is, “let’s go kill a tusker”, let’s go kill an elephant, aka let’s go sink some beers. But until the beginning of this year, there were thought to be seven “tuskers” left in Africa. A tusker is an elephant whose tusks are so fantastically long, three meters or so, that they actually start to join. There were seven left. Two of them in Kenya, guarded 24 hours a day, have been killed so far this year. And some people think, we can just sedate an elephant and remove their tusks, but the stress this causes an elephant through the sedation… elephants are very delicate creatures, so when they are drugged and fall over, they cause themselves tremendous injury. What they are doing with rhinos right now is they are putting RFID tags into the rhino horn, so they can at least identify where the rhino horn came from. Did you know, the rhino horn trades at 65,000 US dollars a kilo? That’s between gold and cocaine.

Katana: That’s a lot of money for poachers to be had.

Humperdinck: Most people don’t realize what rhino horn is.

Humperdinck: Yeah, it’s toenail. It has no value to anybody or anything except the rhino.