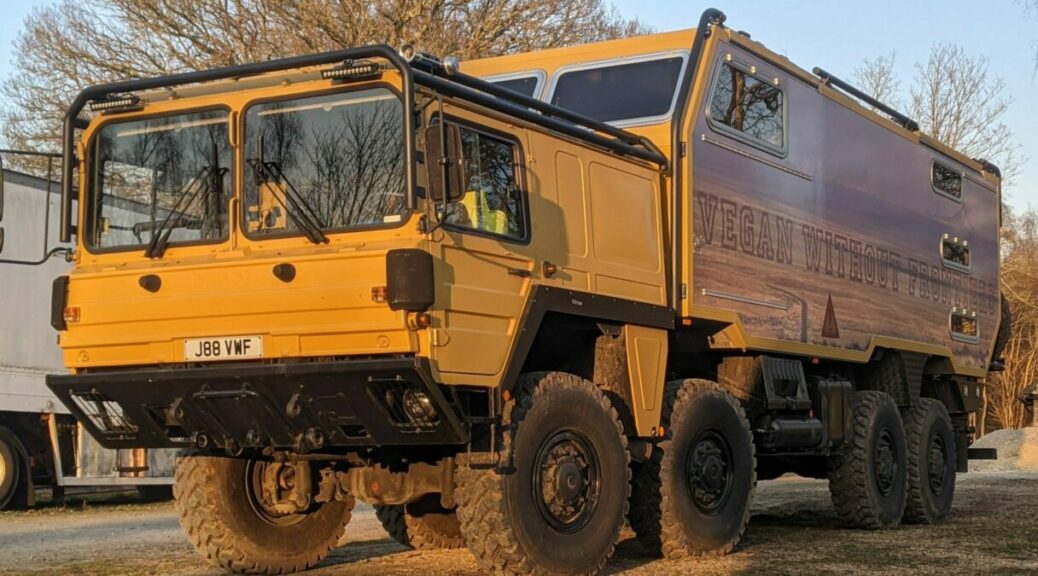 Vegan Without Frontiers has put together the concepts of Overland Expeditions, Luxury Motorhomes and Ocean-Going Yachts to bring you the Overland Yacht: A self-contained, comfortable but go-anywhere base for up to 6 guests. Unique, and all-vegan. No worries about catering, and not tied to fixed locations and infrastructure.

Available to charter (with crew) for your personal adventure.

What can I see in a week?

From our experiences, we’ve put together some suggested itineraries that can be achieved in around a week. Depending on your preferences, these can be adapted. The all-inclusive cost of the whole Overland Yacht with crew, food and drink, and National Park fees for a group of up to 6 ( though we recommend a maximum of 4 for best comfort ) should be estimated at between £950 and £1250 a day. We plan to circulate around Namibia, Botswana and Zambia from Autumn 2021, Covid-permitting.

Here’s the first 4 suggestions. Another is on the way to take us back to Walvis Bay via the Caprivi Strip (including a second pass through Etosha).

All the photographs here have been taken by us on the suggested routes – not borrowed from the internet, so give you an idea of what you should see.

About a week in Northern Namibia…

There are three main segments to a week or so in Northern Namibia from a visitor point of view: The Skeleton Coast, The wild North West Kaokoland wilderness, and Etosha national Park.

Starting from the capital, Windhoek, the first night at the foot of the Brandberg mountain is straight into the wild. Brandberg Mountain is located in the northwestern Namib Desert. The name Brandberg is Afrikaans, Dutch and German for Burning Mountain, which comes from its glowing colour which is sometimes seen in the setting sun. From there, the Skeleton coast is a short drive. The Bushmen of the Namibian interior called the region “The Land God Made in Anger”. Portuguese sailors once referred to it as “The Gates of Hell”. On the coast, the upwelling of the cold Benguela current gives rise to dense ocean fogs for much of the year. The winds blow from land to sea, rainfall rarely exceeds 10 millimetres annually and the climate is highly inhospitable. There is a constant, heavy surf on the beaches. In the days before engine-powered ships and boats, it was possible to get ashore through the surf but impossible to launch from the shore.

The far North West of Namibia is remote and populated only by semi-nomadic Himba people. Wide grasslands separated by jagged ridges of mountains make a dramatic backdrop. Crocodiles patrol the Kunene River on the border with Angola. Leaving this region to the East, the Etosha National Park provides the opportunity to see all the big African Wildlife you could wish for.

About a week in Southern Namibia…

From Swakopmund and Walvis Bay the Namib Naukluft National Park is on the doorstep, where herds of various antelope and zebra can be followed across the plains. This is a desert landscape, ranging from rocky outcrops, gravel and grassy plains to huge sand dunes near the sea. Taking the time to absorb the vast landscapes and rugged beauty is well worth a few days. Further South, the giant red dunes around Sossusvlei are a globally renowned and much photographed site, though being there cannot be replaced by seeing images! This goes equally for the Fish River Canyon; and for sheer juxtaposition of heat and cold, the crossing of the Namib Desert to the Atlantic at Luderitz takes some beating. This can all be seen in a week, though a few extra days for more detailed local excursions might be advisable. Spending a week travelling through Southern Namibia to or from South Africa is a nice option too!

About a week from Windhoek to Maun…

This is all about the Central Kalahari Game Reserve and a transit from Namibia to Botswana.

This is a route we did before in the reverse direction. The Central Kalahari Game Reserve is a vast area of largely unpopulated and inaccessible scrub forest. Underneath are the sands of the Kalahari Desert and a single sandy track runs from the North and West gates to the South. In the North there are more tourists, and a wider variety of habitats accessible for viewing wildlife. But the speciality of this park from our point of view is the completely isolated campsites in the South of the reserve. If you want to experience wild, semi-arid Africa without tourist or agricultural development, this is where to go. Katana wrote up our trip through the park here.

About a week from Maun to the Victoria Falls…

There are various options here – to explore some of the less-travelled bits of Botswana as well as the famous Chobe National Park, before heading up to Livingstone on the Zambian side of the Victoria Falls.

Maun is the centre of Botswana’s Wildlife Tourism – small planes fly guests to luxury camps out in the wilderness of the Okavango Delta, Moremi Game Reserve and other national Parks surrounding the town. Day-trips and scenic flights also set off from Maun. We however suggest taking our Overland Yacht to discover the less touristy parts of the region. The limestone caves at Gwichaba are a UNESCO World Heritage Site. Camping in the bush – out there away from tended waterholes where wildlife sightings are frequent but not guaranteed.

Then to the East of Maun are the Makgadikgadi Pans – a landscape of mostly dry salt pans and open grasslands, with scrub forest and the occasional Baobab tree. Before crossing into Zambia at the confluence of the Chobe and Zambezi rivers, a night in the area of Kasane allows for a stay at some very nice lodges near the Chobe National Park.

In the area of the Victoria Falls, we like to stay at the Maramba River Lodge outside Livingstone. It has a really nice camping area as well as a bar and restaurant that serve vegan options overlooking a creek full of crocodiles, hippos and elephants. Just be careful not to leave food lying around camp as the baboons will have it in no time!

Message us with your wishes and we can see what we can create?