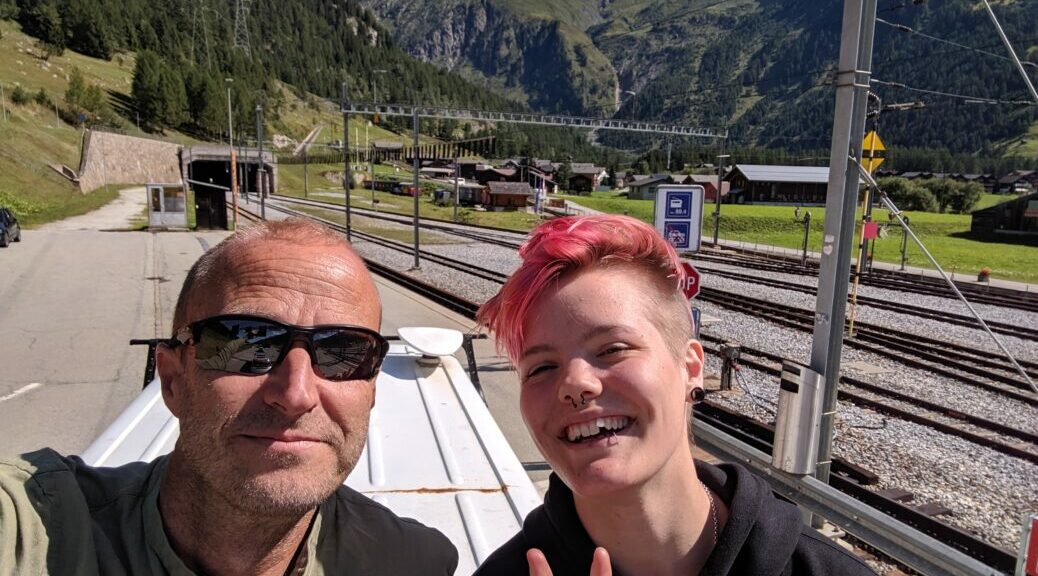 Last month we went on a road trip across Europe – not quite what we’re used to, but the idea was to be in Poznan for the new truck to be moved from the truck factory to the fitting-out shop. It also happened to coincide with Vegan Summerfest in Berlin, the 47th IVU Vegfest, and having guests to try out the whole overland concept on – albeit in Vanya (my rather old Mercedes Sprinter campervan) rather than Katy, the new truck. So here’s what happened when Me, Mikey, Vanya and Charley went East…

The Road to Poznan

We set out from the South of France in the rain…so there’s no photos of our drive through the Massif Central. There were some beautiful views, if only we could have seen them. The teenagers played distracting word games which I soon opted out of to avoid driving into the back of trucks. It rained. They got to choose the music – from the collection of CDs I provided 😉 We drove through clouds and Vanya passed 170,000 miles on the clock – with a working turbo since I got the actuator replaced a couple of days before we headed off, which was nice, and made hills possible. We stopped at a boulangerie and got soaked crossing the road with a surprisingly dense loaf of bread. But in the evening we passed Chamonix and crossed out of France into Switzerland and headed for the campsite we stopped at on night 2 of our first Cape Town adventure. Then we went to one that actually had food nearby and ate some good pizza before sleep. It was a bit nicer in the morning, so we took a train trip with Vanya under the Furka Pass.

I always like driving through the alps, though Vanya’s power steering was making clicking noises and getting a bit heavy on the hairpins, so in some ways it was a relief when we hit the autobahns and began a long afternoon of driving til I’d had enough in the general direction of Leipzig. We didn’t get there, but did find a nice random bit of picturesque Germany to camp in in time for beer, chips and salad – that old time vegan fallback! It was even prettier in the morning.

The original plan had been to take another day before getting to Poznan, but a saga involving a pizza oven not being delivered from Portugal because apparently French logistics companies can’t dial non-French mobile phone numbers (while their Portuguese office has no such trouble) intervened. This has nothing to do with the truck – sorry, we are not having a pizza oven on board! 😀 Anyway, we were going to go via Prague but were delayed by non-delivery of oven, so headed straight to the truck factory in Poznan. The original plan was that the box would be done and the truck would be at the outfitters. The plan by the time we arrived was that the box would be done, mounted on the truck and I could have a look around it and get some cool photos. As you can see…things turned out to be not so advanced, and it took some persuasion for me to be allowed to even see the box. But at least Mikey got to play truck driver…

We did get some photos of the box, and since then they have finished it, added the rear-wheel carrier and put it all together, but I am glad we still had Berlin to visit or it would have been a very, very long pointless journey. As I write, the truck is due to be moved to the aircon guy to have the mechanicals fitted to the engine, so its still not at the fitting out stage.

Anyway, after an hour or so at Plandex we were free to do whatever we wanted so headed towards Berlin on the lookout for a campsite. More vegan pizza ensued, followed by a visit to a micro-brewery with no beer – and no customers. These things could be connected, but the campsite by the lake also had a bar so I was OK. Next morning we headed to Berlin for Vegan Summerfest / IVU Vegfest!

I’ve been to Berlin once before – in 1990, by coach from London just after the wall came down for ‘The Wall’ concert staged on the site of the Berlin Wall near the Brandenburg Gate. That was also the last time I knowingly ate meat (everything was closed and only one place would serve us anything, which was their lunchtime leftovers). It was good to be back then, visiting one of Europe’s biggest vegan events and seeing the huge growth of vegan choices. It was also great to eat all sorts of things that weren’t pizza, chips and salad for a few days! Oh and of course being in Germany the beer was good, and vegan! Vegan Summerfest took over Alexanderplatz for the weekend and was well attended (too well in some cases as the queues for the food stalls were very long!).

Before leaving Berlin, we took a vegan tour of the city organised by our hosts ProVeg International. For me, visiting the old Stasi remand prison was a little creepy, bringing my 2 visits to the city full circle – history is not that old. Or maybe I am! 🙂

It was great to meet up with some old friends and make new ones (this was my second IVU Vegfest after Nairobi last year). We also had some good conversations with people from vegan organisations around the world. Fingers crossed we’ll have some news soon about a launch event for the Vegan Without Frontiers first Expedition!

This isn’t so much the start of the next adventure as the countdown to kick off. We are already well down the road from the start. Those of you who have been following on Facebook know there’s a little project in the offing, and today we have an actual start date after finalising the contract for the new truck build. Oh, and there was also a bit of driving it for the first time.

Back in the day, when I was looking at Landrovers and Toyotas for the first trip to the desert, I came across videos of the support trucks for the Paris Dakar rally. Whilst some wrote them off as being ‘ridiculous, and not in a good way’, there’s always been a sneaking wish to go drive one. Well its not a Tatra, but Vegan Without Frontiers Limited is now the proud (and slightly nervous) owner of a low-mileage, ex-German Army M-A-N KAT1 (A1) 8×8, which is about to be turned into an off-tracks rolling vegan guest house…or is it a yacht on wheels? 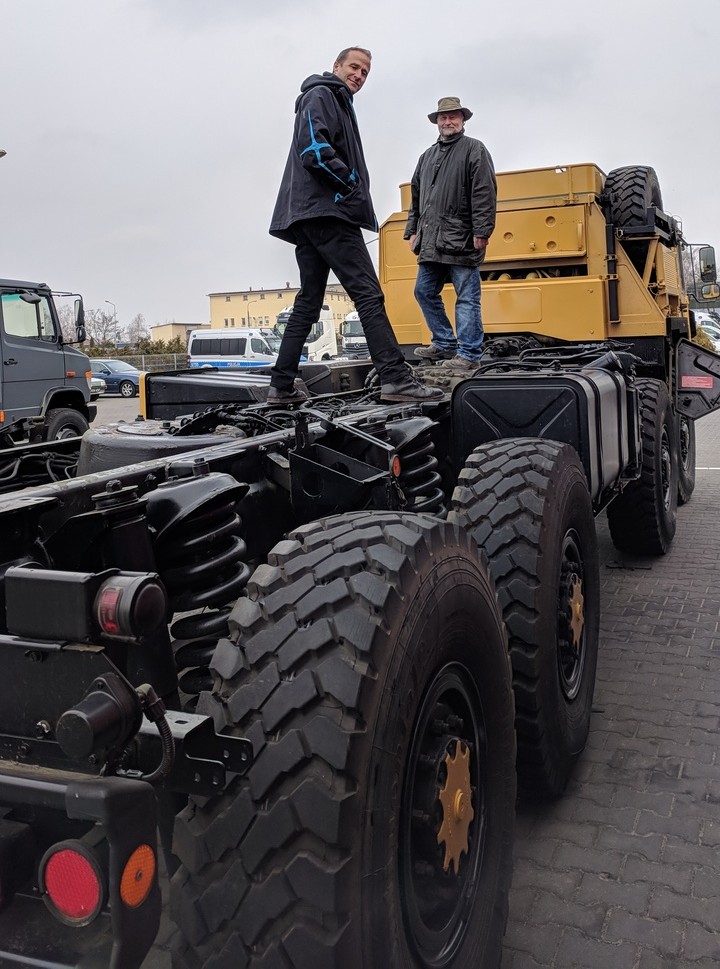 This time next year we should be taking it on ‘sea-trials’ to West Africa before embarking on a round the world journey. Its five–year mission: to explore strange new worlds, to seek out new life and new civilizations, to boldly go where no M-A-N has gone before. Which to be fair is at least as accurate as it was for the USS Enterprise! I do  however suspect it is unique in the world of vegan travel.

We will soon be opening for public involvement – crew and guests are needed for the first dip into the Sahara through Morocco, Western Sahara, Mauritania and Senegal. Lets call it the Poznan-Dakar Rally? For this trial adventure there will be big discounts for guests who are willing to be the first to experience life aboard a Vegan Overland Yacht. More on that later, but for now if you’re inspired by the ridiculous (in a good way), drop us a line and we’ll talk tofurkey?

Poland may not be the most vegan-friendly country in Europe, but vegan pizza has made it here too! 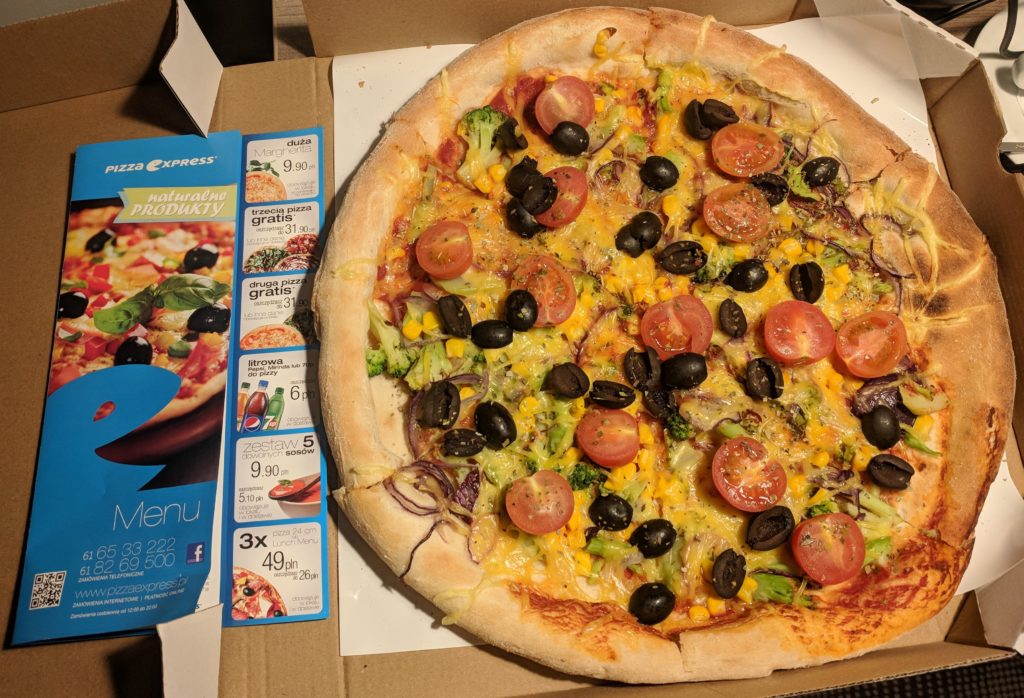