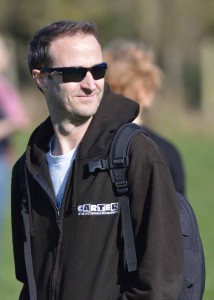 Jonathan had had quite some adventures already – most notably training and then racing a yacht from the UK around Cape Horn to New Zealand and Australia in Global Challenge 2004-5. Before and since he had travelled the world bungy jumping dressed as a pantomime horse, and dragged an assorted rabble of adrenaline (and wine) junkies around Europe on extreme sports challenges through the Dangerless Sports Club.

He had worked driving buses, for an environmental charity and then (to pay for all these adventures) in Europe and the Middle East developing railway systems, but finally felt it was time to settle back in London to a more quiet life. But life doesn’t always let you settle, and after the sudden loss of his wife to cancer in 2012 the world didn’t seem to make so much sense any more. After a year of carrying on with the daily commute, it seemed time for a change and the desert was calling so he recruited Katana to join him for another little adventure…the rest, as they say, is history.