Well here we are – the countdown has hit zero days. We’re off…eek! When I thought about this moment a month or 2 ago, I thought about following up Inspiration with Trepidation, thinking it might be appropriate today. As it turns out the trepidation has diminished and this should be titled Anticipation. We’re about to go on holiday for a week in the South of France after all! Once we’ve managed to clear and clean the house we have a few days of sunshine (hopefully!), wine-tasting, swimming in the Med and a bit of sailing to look forward to. Vegans on a mission can also have a nice relaxing time just like anyone else 😉

OK, there are things ahead that warrant a little nervousness – I’m still waiting on my Iranian visa, and as always the situation in various countries en route needs watching for safety – and next week there’s the small matter of a 190m bungy jump I seem to have committed myself to. That deserves trepidation!

Katana continuing here. I asked Jonathan a few days ago what was he scared of about the trip, and he replied very bravely with “nothing”. I don’t believe that is true, but seeing as how he is trying to maintain this idea that everything will be dandy, I won’t go into his fears now.

For me the biggest fear is that I might lose my documents. This comes from the fact that to replace my passport takes about three months, and I don’t want to take three months out of my life to be stuck somewhere unable to travel outside of the country, fearing that more and more time is wasted on just waiting. Another fear is that something would come up to cut the trip short. But most everything else is doable and treatable, so I don’t see any significant risks that can’t be avoided or fixed.

We got a med kit and bought extra bits and pieces for it, and I had a fun time going through it all. I think if I wasn’t an artist, I would have been in the medical field, diseases and cures fascinate me! I think the most exciting time I had in preparation for this trip was my first-aid course.

The hardest part of leaving is saying many goodbyes. For me it is an ambivalent goodbye, because even after Africa I am not sure I will be here or there, but I definitely know my time is London is up. Perhaps I will find a place in Africa that I can call my own, or maybe I will get homesick. Let’s see what happens!

Everyone knows that being vegan means not eating animal products, right? But there’s more to consumption than eating…and what we wear is an important part of that. I’m sure the majority of people these days also see wearing fur coats as unacceptable – a luxury item made of dead animals? Well…how about all those leather shoes?  Leather is animal skin too. OK – shoes are not a luxury item…but is the choice to use leather rather than alternative materials not just the same thing as choosing a coat made of animals? Perhaps leather is a better quality material and its about practicality, not perceived luxury or status, or availability?

Well, we don’t think so – and there’s lots of evidence to suggest that cruelty-free materials are now superior to the leather counterparts. When I went sailing in the Global Challenge race in 2004-5, I was supplied with a pair of deck shoes by Vegetarian Shoes of Brighton as an alternative to the leather ones worn by the rest of the crew. Made of a breathable microfibre, the material was developed to have the same properties as leather and yet not suffer the degradation by a salty marine environment that damages leather. After the race,  where they were worn daily on the foredeck and around the boat, that pair of shoes lasted another 8 years of general summer wear – with a fair amount of getting wet in salt and fresh water as well as wandering around town. They were only retired last year as I’d pretty much worn through the soles – the leather-replacement uppers were still in good shape.

So when we came to look at our needs for an expedition through the desert, there was only really one place to go. This time round we’re wearing something more suitable for the desert – Retread Bush Boots. Lets see how well these work out as expedition footwear – they don’t feel like a compromise! 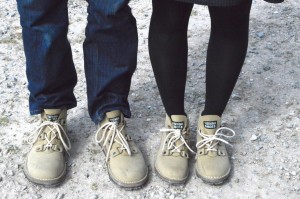 Of course…this is just one of many companies supplying a great range of footwear – if you’re looking for something a little more high-fashion for a night out in town, maybe Beyond Skin have something for you?

April 4th 2014: 10 years ago today, some things were so much the same. I was preparing to set off on one great adventure – to race around the world under sail, against the prevailing winds and tides. On that voyage I would rely on the daily support of people I had only recently got to know well, but that I would come to trust with my life. I had a vague idea from my own experience and reading of others what I was going to face, of the highs and lows ahead – but the adventure ahead was appealing all the more for the unknown. I think a lot of that is the same today.

But on this day back then, I was also making a commitment to a beautiful person who had come into my life. A decade ago Elena and I were married in Prague and set out on our own adventure. We had so many highs – saw many wonders of the natural world together. Her endless enthusiasm and positivity and gritty fighting spirit in support of our core vegan principles strengthened both of us. We had our hard times, our adventure was not a smooth ride but it was a great one. Then she was taken from us. 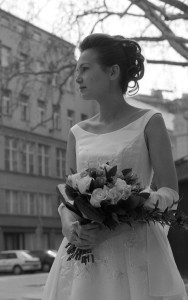 So today, it seems everything has changed, nothing is how I planned or would have chosen back then. But some of those things are actually the same – Elena will again be travelling with us though not physically present. Her spirit has inspired many, and I hope we can do our bit to keep that spirit alive. We can only make the choices from where we are now, not where we have been or would have liked to be. It is Elena’s support that allows us to do what we are doing.

As we set out again, in other ways against the winds and currents – we do so in hope that we can make a difference, to ours and other peoples lives, and to perhaps help the world to be a better place in some small way. I do so, because Elena told me to stay and do good things…and because it’s going to be an awesome adventure!

Katya was there a decade ago, and I’m glad she’s here this time…one of us needs to be the responsible adult, and (since you were excused that responsibility last time) now it’s your turn, Katana. Good luck!

So the timer on the front page ticks down towards the start of our adventures. I can’t tell whether it is speeding up and slowing down, or I’m just flapping backwards and forwards between panic and impatience. But we’ve been busy…

The new lens for my camera looks like it could come up with good results with bigger wildlife than we’ve been practicing on, and we’re getting through the task list pretty well. But there’s still LOADS to do before we can go! Off to Brighton this weekend to see if we can find some shoes to take us through the deserts and keep our feet dry in the wet bits (and maybe also to be stylish and presentable when we get there?). Troopy (until he gets another name) will be going in to have some extra mods done to cope with the new bits of the world he’ll be visiting, and Chayka (until I get another name…I mean, am I really to spend my life named after random avians?? I’ve spent a couple of decades called Chicken…this isn’t much of an improvement!)…anyway I digress…I’ve got to get on to the whole immunisations, insurance, visas and vehicle documentation. And Katana (yeah, guess who got the cool nickname??) is busy as anything with her own visas, immunisations, art and general planning as well as the thankless task of keeping a squawking seagull pointing in the right direction. Next up…Katana’s first ever camping trip…this could be fun!