While the new truck is being built there’s a bit of a gap between travels, so to fill in I took a trip to India earlier this year to check out the possibilities for future expeditions. After all, we are aiming to do a round-the-world journey and India could be part of the plan. So, what’s it like for a vegan overlander?

Firstly, veggie food is not a problem, even if the word ‘vegan’ is likely to get you blank looks! There’s lots of vegan food available, especially in the many ‘pure veg’ restaurants and hotels – but you do have to keep asking whether there’s milk, ghee, butter, curd in things.

Secondly, overlanding by public transport is just a matter of joining the locals. Quite apart from the fact that there’s pretty much nowhere you can’t get to by regular buses – the vast majority of the travelling population do so by bus and train rather than their own vehicles. Also, driving yourself is likely to be an unnerving experience until you get used to the rules – first rule of driving in India? There are no rules. Second rule – actually there are rules but they are the opposite of what people do. Just use the horn a lot and dodge the cows.

In a 10 day trip around Southern India I tried out cars, buses, scooters, trains and sleeper-coaches. There’s some suggestion as a traveller that you should avoid most of these for various reasons of safety, but they all seemed to work for me – and the sleeper-coaches have to be the most comfortable (when they finally turn up).

So will we be going to India in the new truck? I don’t think so – a major part of what we do is getting to places and seeing things you can’t as a tourist. In India, I didn’t see much opportunity for that, and there’s not much setup for camping in any case. Also, India is HUGE, and down South is not exactly on its way anywhere, so maybe we’ll visit the North on the way across, or through the Himalayas, but travels in India I think are best done by alternative means. 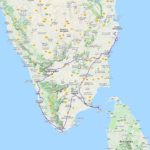 Anyway – here’s a quick tour of Southern India in pictures, starting with my brother’s ideal car – well, he’d like one of these to remember his time in India but maybe not quite this one! The Ambassador – until recently ubiquitous and the standard for taxis, but now disappearing fast. This one finding its final resting place in Mahabalipuram. 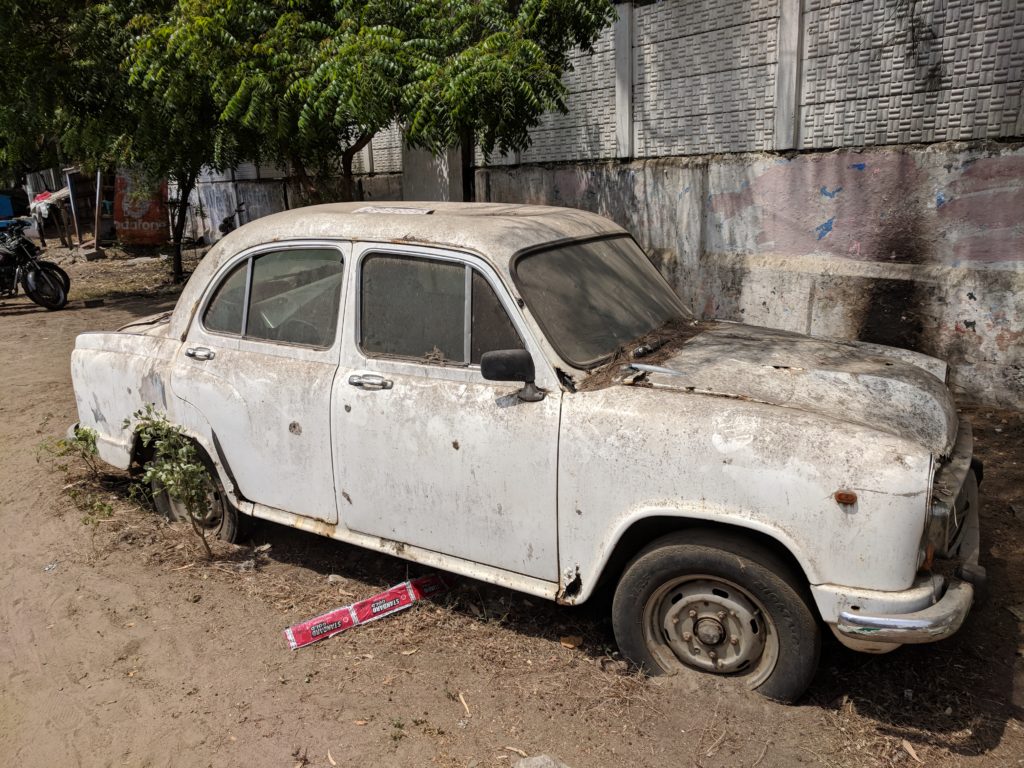 The area around Mahabalipuram, South of Chennai, is famous for the series of temples carved out of the strange granite monoliths – some buried in the sand and some lost under the sea. What you don’t get from the photographs is the full-on assault on the senses by the heat, and the PA systems broadcasting from competing temples and mosques… 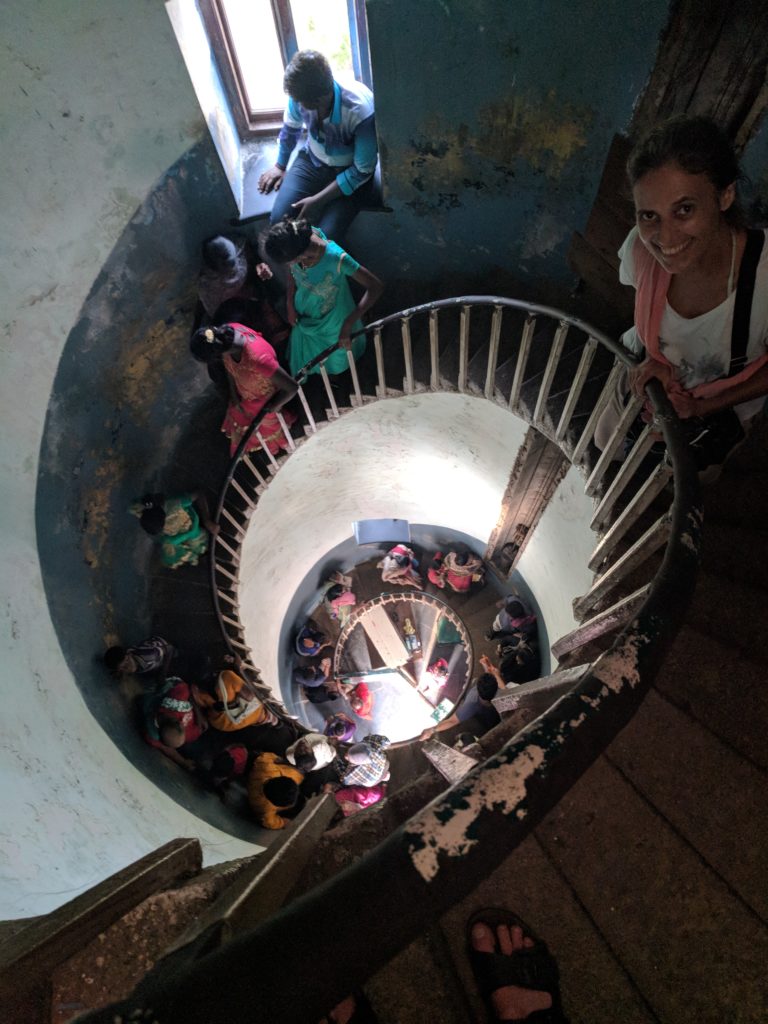 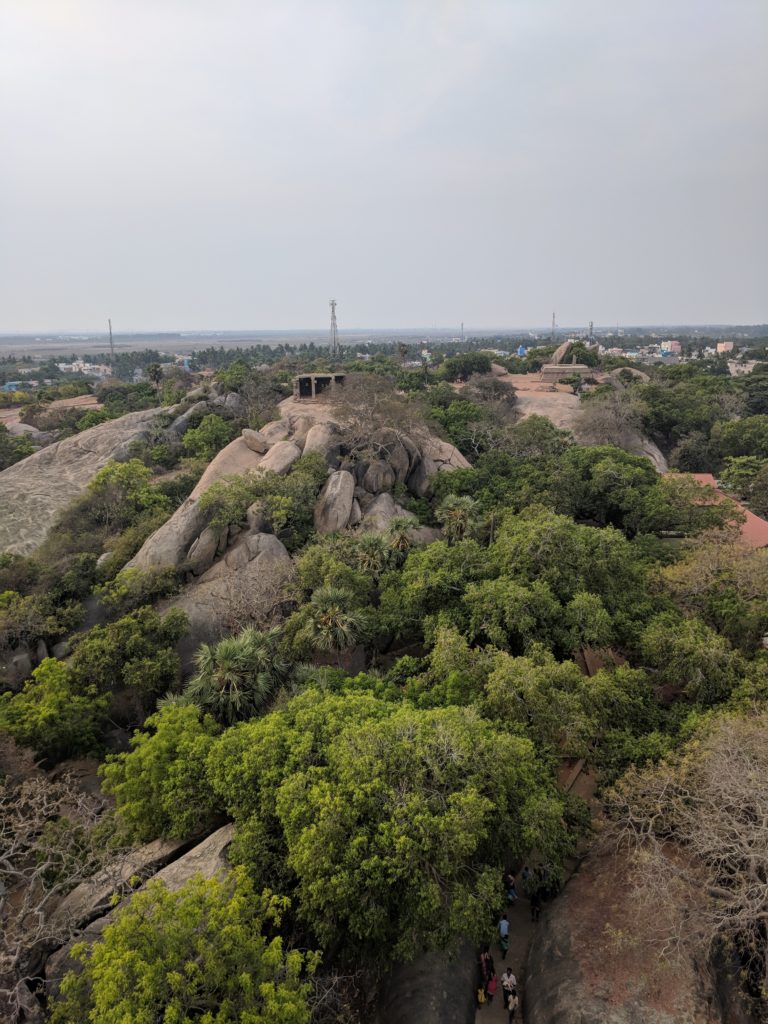 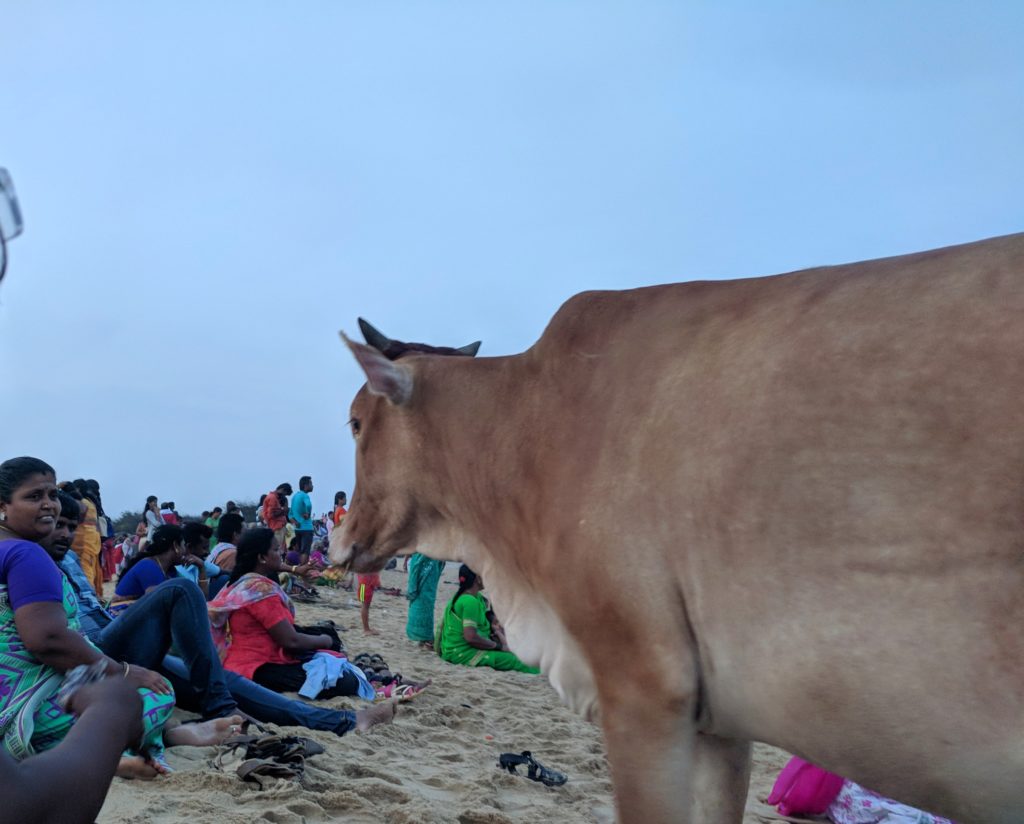 Heading further South by bus was a nice change from driving for me…and I got to appreciate the driving skills required for the equipment here – the 2-tone air horn was by far the most used! 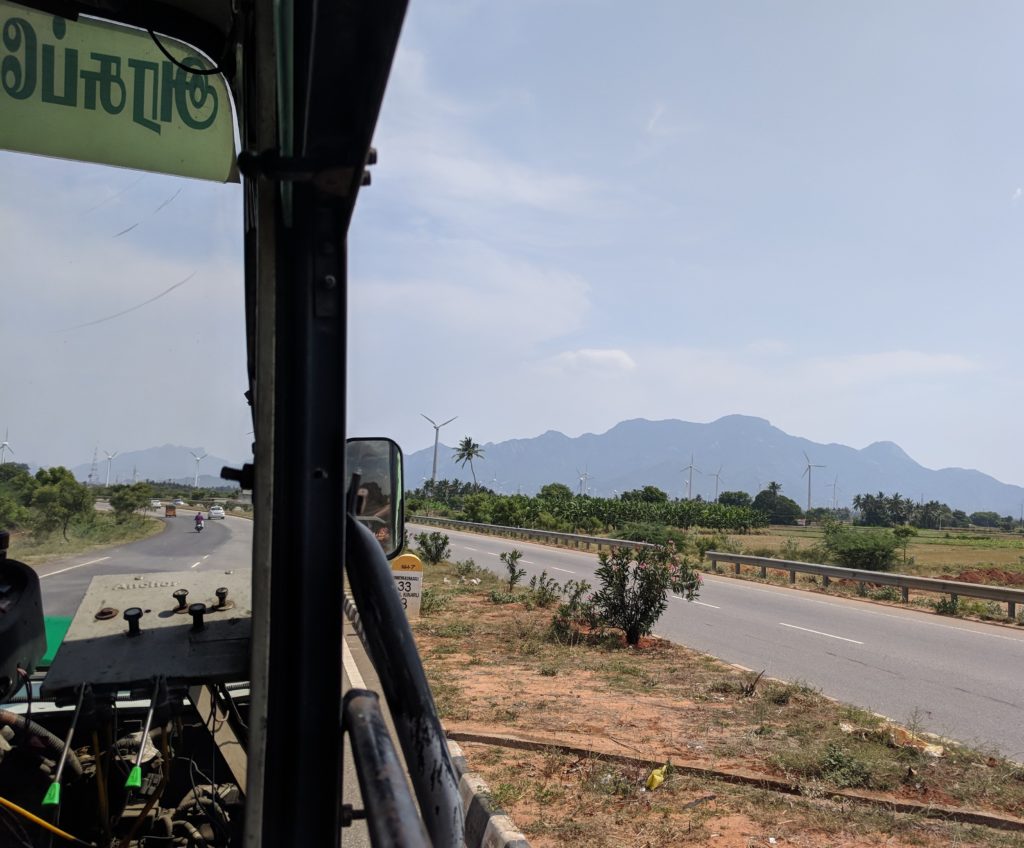 Crossing the sea to Rameswaram by train looked like a fun trip, but the train didn’t fit our schedule so watching from the road bridge had to do (signs saying it was forbidden and definitely against the rules to stop were universally ignored). 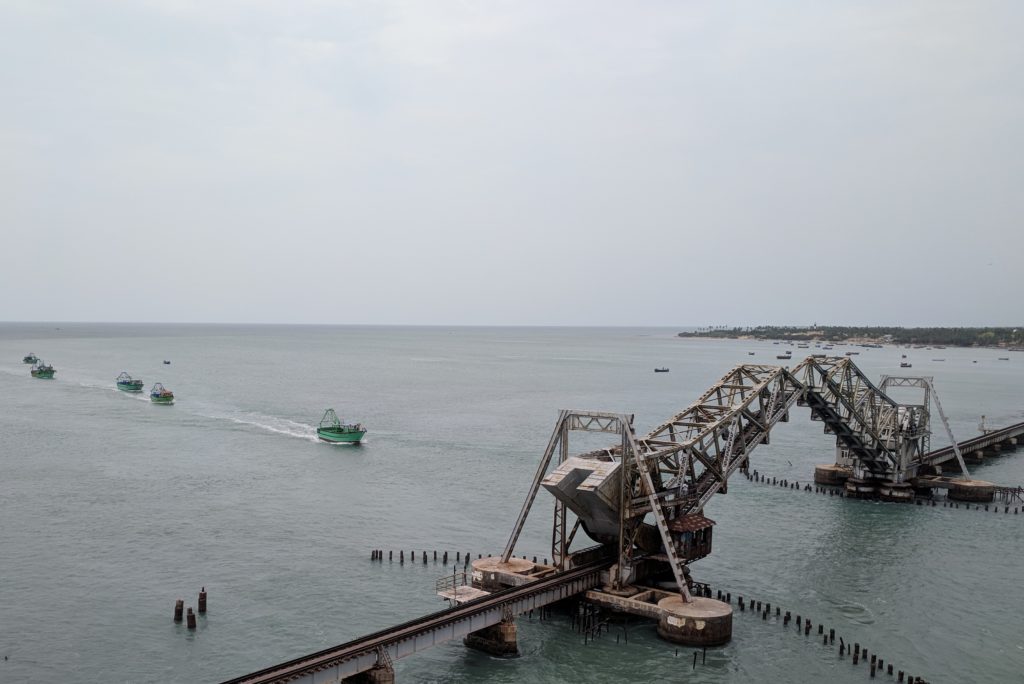 After another day on a bus we came to Kanyakumari at the Southernmost tip of India – more temples, and a swim in the sea at sunset. 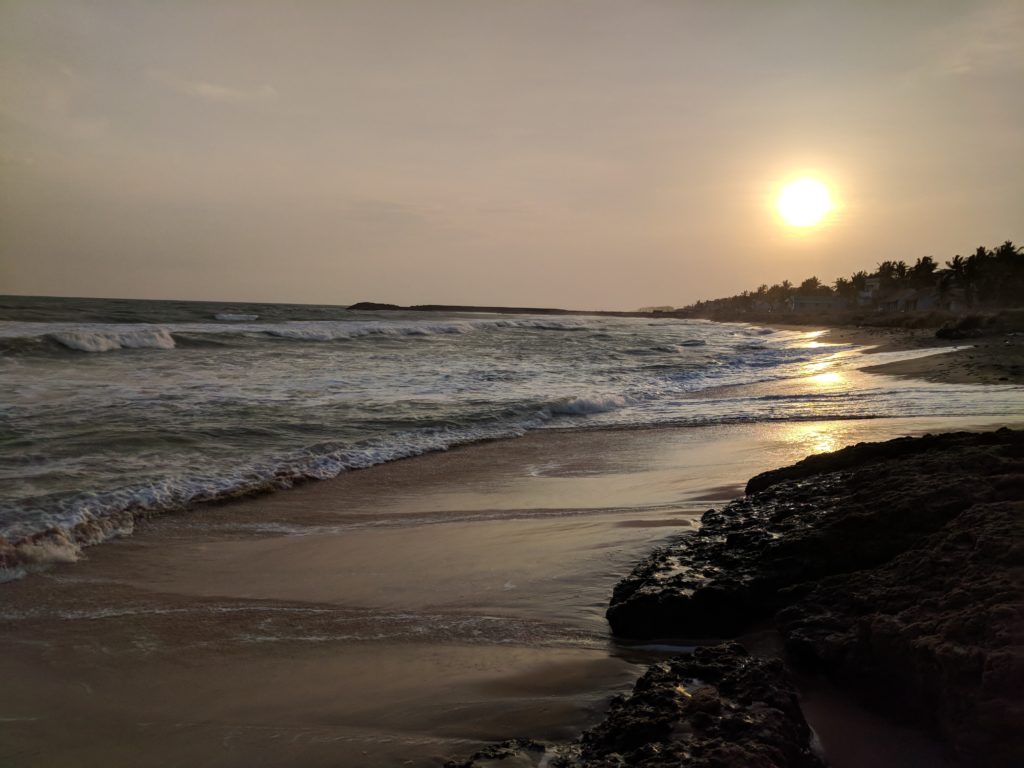 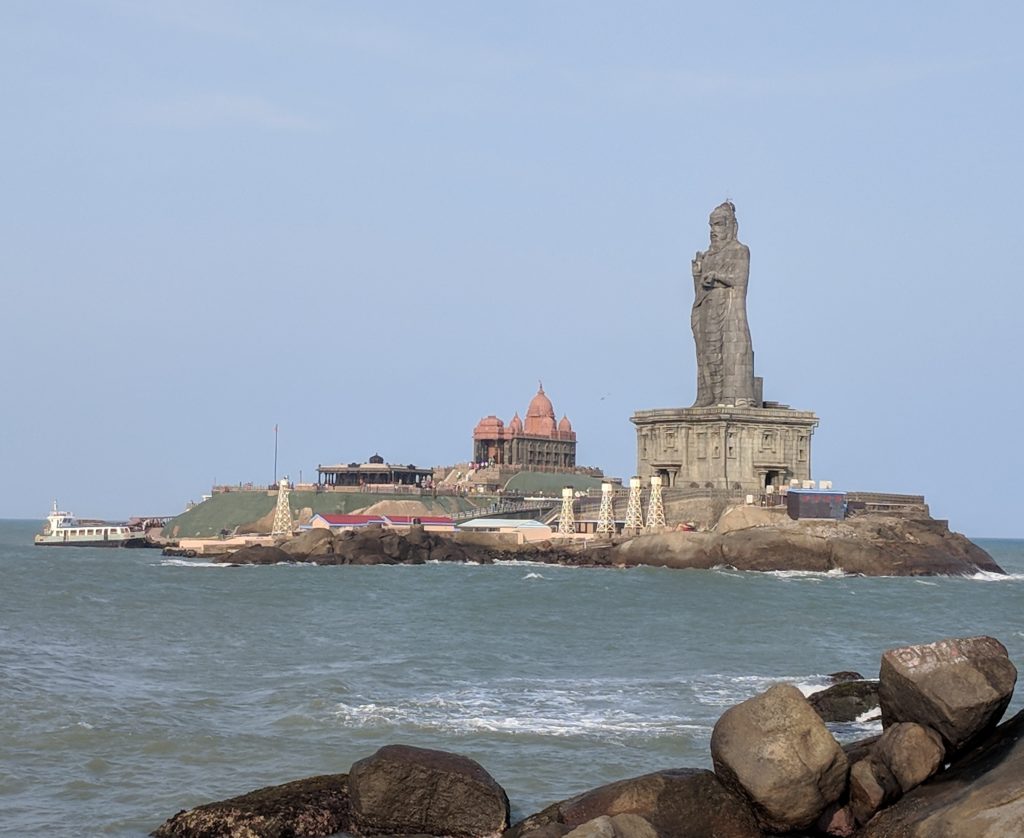 Finally it was time to take a train! The train station in Kanyakumari is pretty impressive, and the train was comfortable – and nowhere near as crowded as I was expecting. A nice way to see some scenery away from the main roads as we headed North up the West coast towards Kerala. 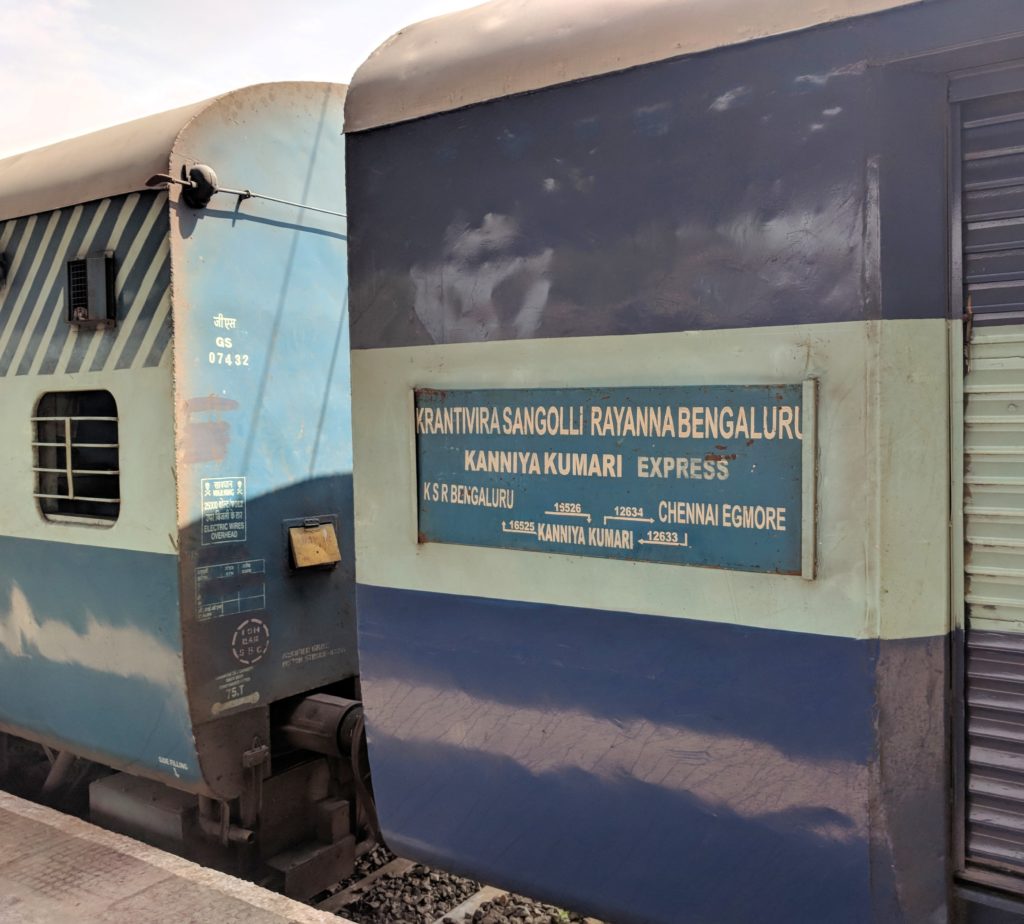 Taking to the backwaters by local passenger ferry got the water-based transport box ticked, and was a cheap and more interesting option compared to the ‘famous’ houseboats… 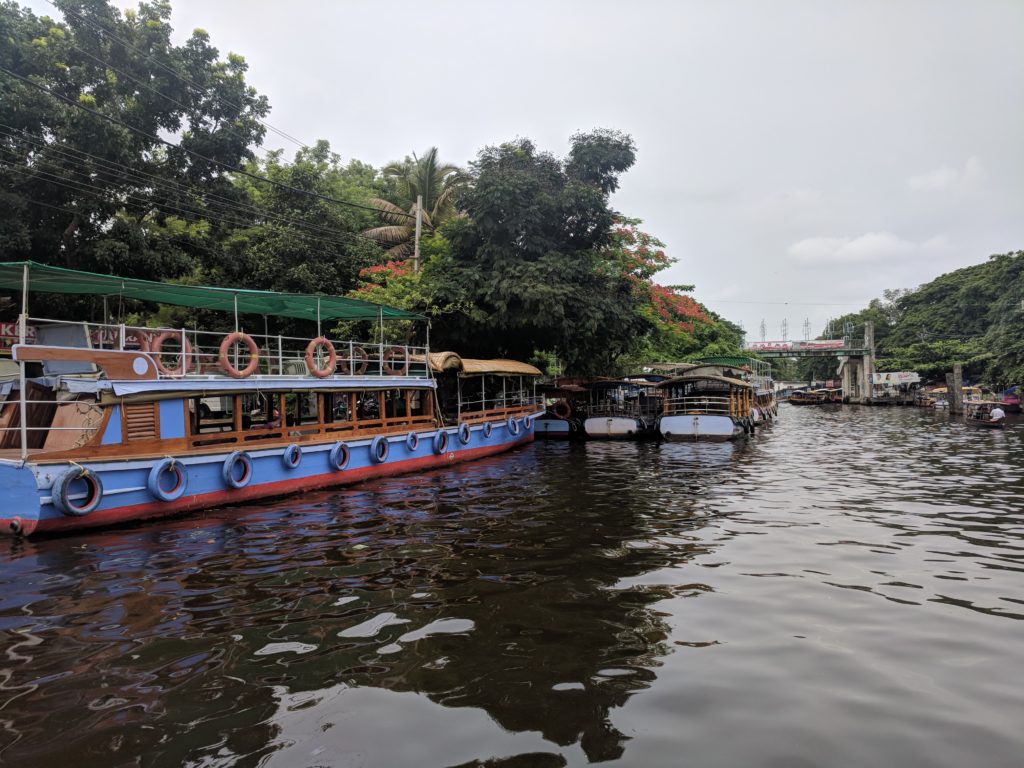 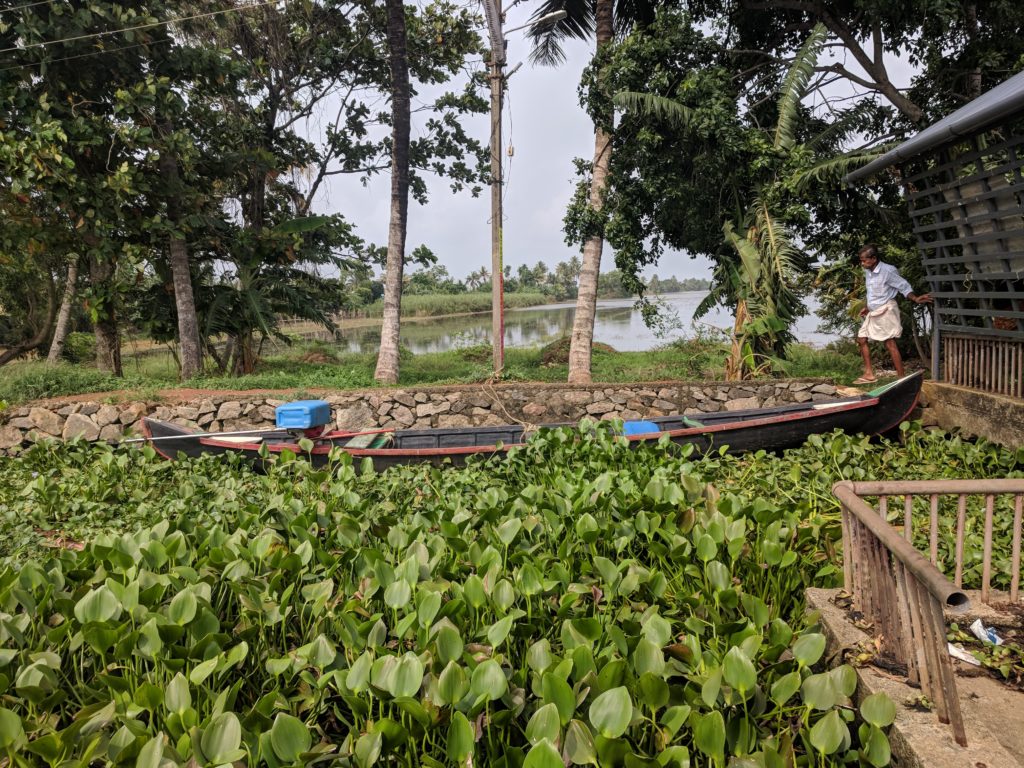 Final destination, now in the distinctly rainy but still hot climate of Kerala, was Fort Kochi. Very much a different feel to the East Coast of Tamil Nadu. 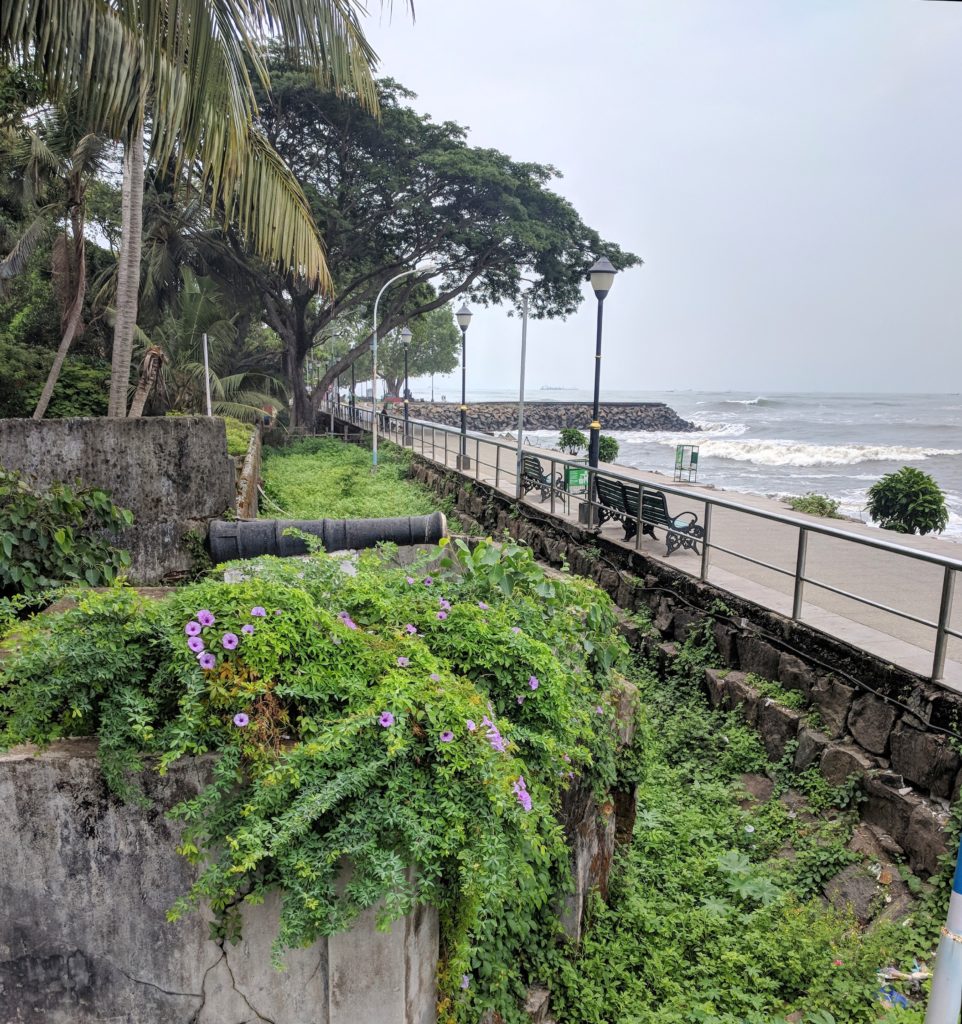 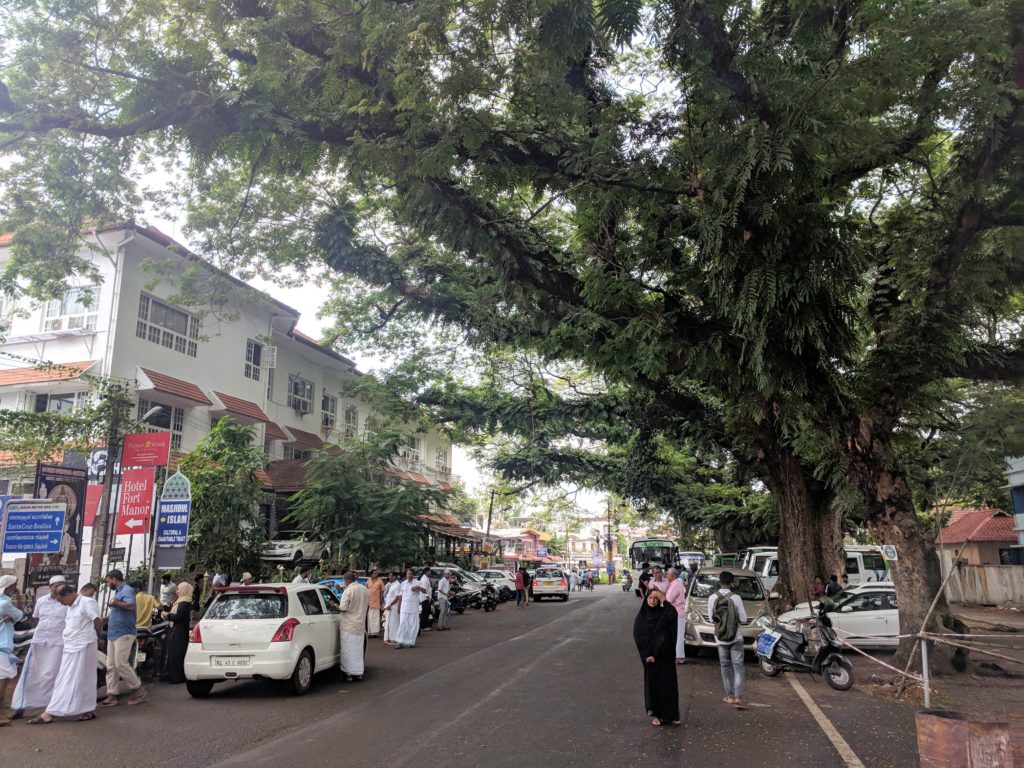 Then it was onto a sleeper coach for the trip back to Chennai and the flight home. 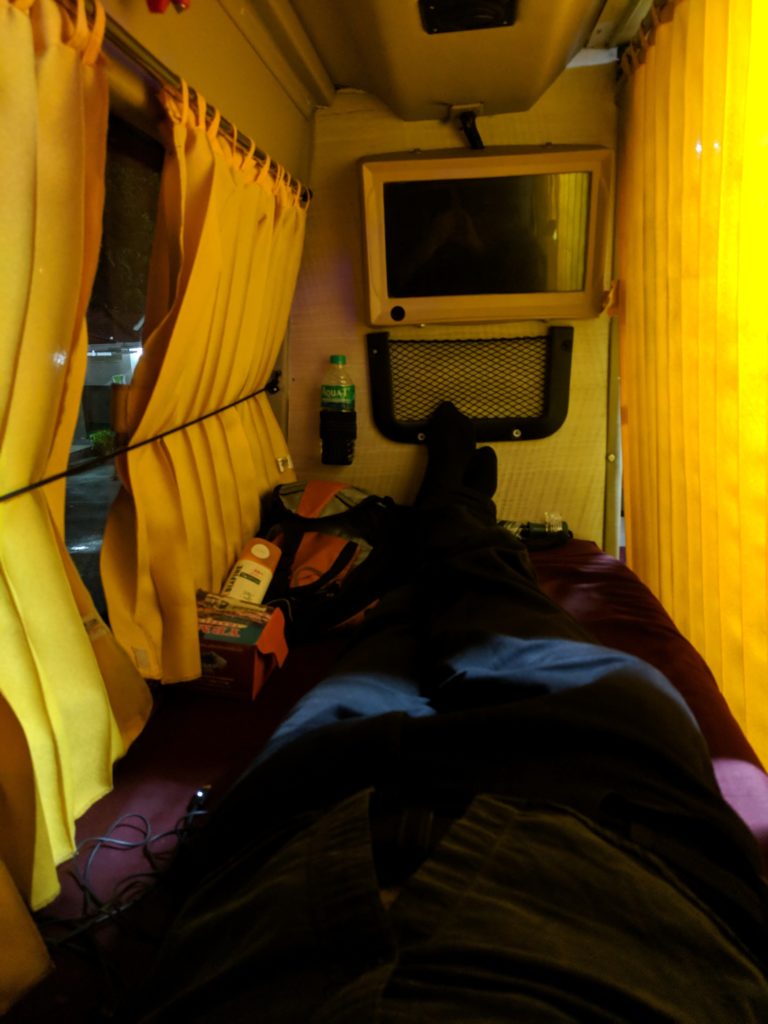 Next up? A trip back to Kenya for the 46th IVU World Vegfest in Nairobi – looking forward to getting back to Africa, but not quite yet on the road with the new truck – fingers crossed for next Spring!