Slowly crawling over and between rocks and boulders we descended Van Zyl’s Pass, and saw the grassy Marienfluss Valley spread out below us between the mountains. I’ve heard people describe this moment as all sorts of special, but until you see it, you can’t feel that emotion. Photographs struggle to capture the grand scale of the scene or the feeling of remoteness. All I can say is that it was one of the most unique experiences of all my travels so far, and we took some time to breathe it all in before descending into the wide savannah with its jagged mountain backdrops.

People have told tales of abandoned vehicles and shredded tyres, of people stuck for days waiting for someone to come along and help them out of trouble. Others have said its nothing so bad, a bit rough but no problem. I have to say Van Zyl’s Pass has elements of both – getting it wrong could land you in a lot of trouble due to its remoteness.

It is a very rough track, with difficult elements and sharp rocks, and is extremely steep in places that have you staring straight down at the ground out of the front window, the car sliding over loose rocks the size of large watermelons. 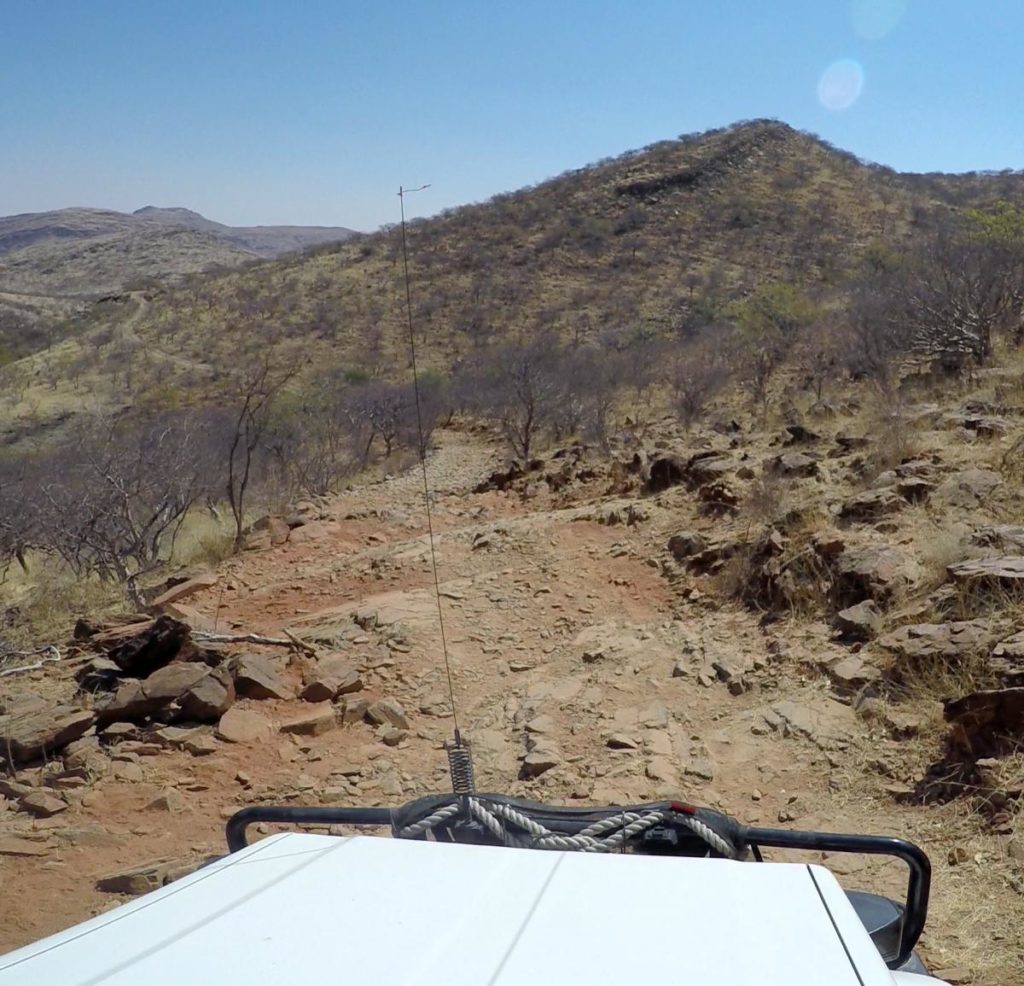 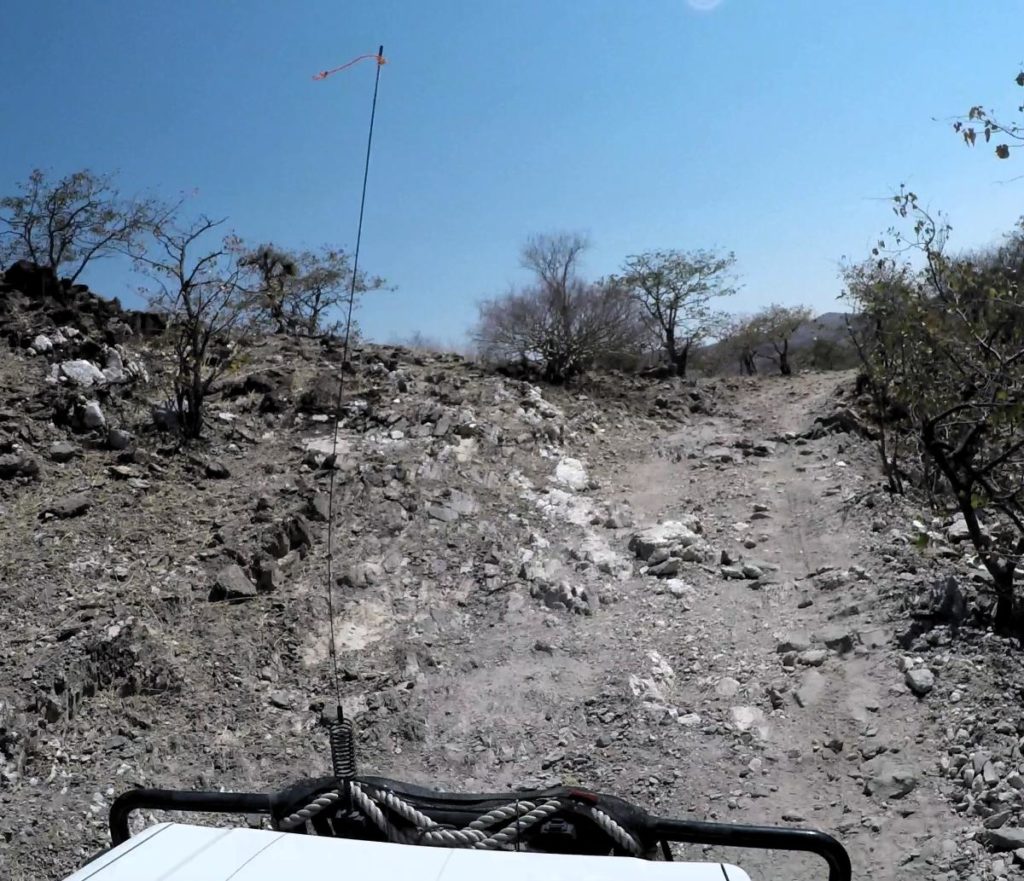 But with care and good equipment it is easily passable, and we made the trip from Opuwo to Marienfluss in a day, skipping the stop off at the Van Zyl’s Community Campsite. Of course, getting in is only half of the fun – the way back out again is a long and sometimes challenging route of its own through the most remote of Namibia’s landscapes.

This has been a short couple of weeks to fit in so many spectacles, and we were left a little dazed by the kaleidoscope of ever-changing vistas and magnificent scenery. I hope some of the photographs convey a little of the magic of the wild North West of Namibia.

We started at a fair pace, heading out of Windhoek towards the Brandberg Mountain – Namibia’s highest, and visible for what seemed hours of dusty driving before it loomed closer.

Then up the Skeleton Coast and inland again to Palmwag.

Around here the fences largely disappear, you enter the land of the Himba people and road signs warn of wandering elephants.

From Opuwo the trail thins out, and then turns into a collection of narrow tracks through the thorny brush heading North to the sandy turn-off for Van Zyl’s Pass.

The pass itself winds its way down from the high plains at 1000m  into the Marienfluss Valley at 280m, which together with the Hartmann Valley form vast flat plains of sandy grassland spreading North to the Kunene River.

Once through the pass, a couple of hours drive on the red sandy track through tall grass brings you to the frontier with Angola. And the beautiful Syncro campsite on the riverbank, patrolled by crocodiles.

Here we paused for 2 nights to soak in the scenery and wilderness, and I got another paramotor flight in early in the morning before the wind and thermals got going. Sadly, the GoPro continues to malfunction and all we have in the way of footage is some blue-hued and bleached shots of Troopy I got while taking a brief aerial view of the valley on the way back South…but I can tell you it was a lovely place to fly!

The way out of Marienfluss took in the length of the valley, heading 100km South before clambering through Red Drum Pass and making our way across the ever more desert plains to Purros.

Here we camped at a community campsite on an island in the wide, sandy riverbed – usually frequented by elephants, but for now they have gone down the river in search of water so it was a quiet night under the stars. Followed by the first cloudy morning in memory! 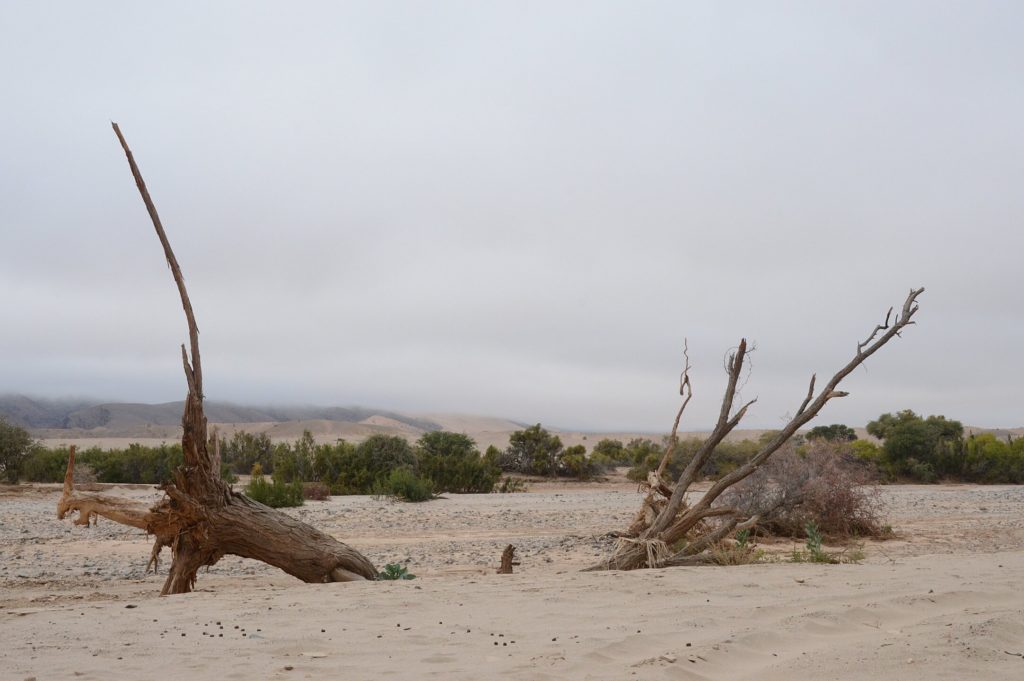 Heading East the next day along the riverbed we crossed our outbound track at Sesfontein – refuelling again at the tiny station which is apparently out of fuel for 5-6 months of the year…fortunately not today!

Then again cross-country towards the Western end of Etosha along what my map described as a ‘game-track’, through deeply rutted dry river crossings full of deep feche-feche which covered the car and blocked out the sun, passing the spot we camped in the bush on the first trip but opting for an official campsite with showers this time.

Next up, a couple of days of wildlife watching in Etosha, which is always an exciting experience, if at times a little like a giant wildlife park with marked viewing spots and borehole waterholes. Check the photo gallery for the animals!

And then we landed on the tarmac again and made our way towards Livingstone  – randomly running into the Swiss couple I’d met in Lomo at a campsite in Grootfontein – they had shipped down to Gabon and driven the rest of the way. Talking to them over a beer and a campfire made me a little regretful, and a little relieved, to have bypassed the central parts of West Africa.

So via Caprivi to the Victoria Falls, and the end of Agne’s leg – though fortunately not as literally as Katana’s on the last trip! Bungy jumps done, waterfalls admired, elephants watched from the campsite and hippos shouting at each other all night, and the excursion was complete.

Right now Agne is on a plane back to London, which will I’m sure make the last couple of weeks seem even more like an unreal dream-sequence. Steve (who until yesterday reckons he’s never had a vegan meal) has arrived for his first taste of Africa and we will head off into Botswana in a bit. I think we’ll take this leg a little bit easier…